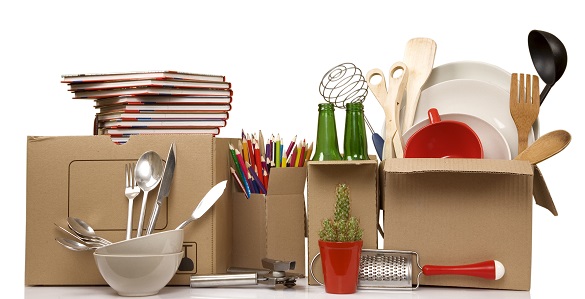 You’re packing for a move and trying to decide: What do I toss and what do I keep?

It’s important to know that “toss it” doesn’t have to mean throwing something away. Toss is just a euphemism for getting it out of your house. Give it to a friend or family member, hold a yard sale to make a little extra cash, or donate it to a charity. For items that are still useable and in good quality, you’ll always be able to find people who will be happy to receive it.

One important thing to note: ask your family and friends if they think they’ll really be able to use the item you’ve gifted to them. After all, just because you’re un-cluttering your own house doesn’t mean you want to start cluttering up theirs! What happens when they decide to move? Maybe the item you gave away will end up coming back to you!

Before you put one single item into a moving box, you need to ask yourself – do I want to bring this to the new house? If you don’t have an immediate guy reaction telling you yes or no, then the following questions will help you narrow down your options.

Toss it or keep it?

Do I have more than one of this?

When sorting through all your possessions, keep in mind what items you have double of. Put these items together in pairs right next to each other. One of them has to go. With both of them in front of you, you’ll be able to make a quicker decision. Which one have I used more? Which one has been sitting in a closet, unused? When you know which item you want to keep, it’s time to take the other one and toss it.

Have I used this in the past six months?

Let’s start with kitchen appliances, as an example.

Kitchen appliances help make live so much easier when it comes to cooking and baking. They shouldn’t just be collecting dust somewhere. If they are, they need to go!

We all tend to keep the appliances we use most on top of our counters, right? Those are the items you’ll probably want to keep, so don’t bother starting with those  – we can come back to them later. You want to start sorting through all the stuff at the very back of your cupboard and pantries. You know – all those blenders, mixers, choppers and other gadgets that have been sitting there forever, covered in a layer of grime.

Take out each item and ask yourself, “Have I used this in the last six months?” If the answer is no, you need to tell yourself, “I haven’t used this in forever. I need to get rid of it.” Saying it out loud helps give you more conviction to toss it.

Have I worn this in the past year?

The changing seasons means that you should hold on to clothes for at least a year. After all, you won’t have worn your winter boots six months ago when it’s only September! However, if a full 365 days has gone by, and you haven’t worn this one article of clothing yet, you need to toss it.

For the women out there, there is one exception – the little black dress. You thought it was going to be shoes or purses, , didn’t you? Nope. You can never have too many little black dresses. There is such a thing as too many shoes and purses, though. Thank about how many shoes you own, and how many of them are the exact same colour and style. You also may think you need three of the same white canvass bags for going to the beach in the summer, but be honest with yourself – one is most definitely enough.

You’ve gone through all your possessions and pared them down. Good for you! It was a lot of hard work, but you did it successfully. Now it’s time to start packing. Isn’t the packing process so much easier with less items to worry about? Even though it was probably tough to make the decision to toss or keep, you know you’ll be much better off.