2016 was a milestone year in the lives of Chi and George Nwajiaku, brothers who made their way to North America from Nigeria. 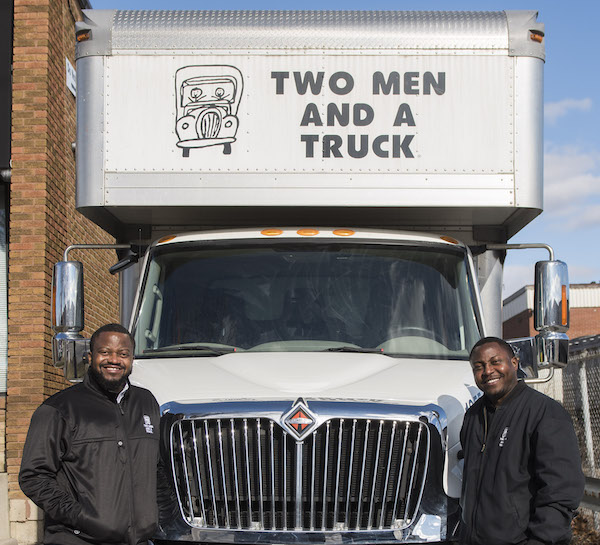 “This brand has made waves in Calgary,” Chi says. “We are getting excellent consumer reviews.  Customer service is key in this company, and treating people well pays off.”  He comes at this attitude from personal experience. In 2009, upon arrival in Calgary, where Chi was transferred with a multinational firm, “We asked friends and family for moving company referrals, but most had told us unpleasant stories. Our moving experience was negative as well, so we decided to explore the opportunity to create positive scenarios for people needing moving services.”

Cynthia and Chi came to their decision with diverse backgrounds. Chi has graduate and postgraduate degrees/training in finance and business administration, plus over two decades of experience in the construction, banking and petroleum industries. He has managed teams in marketing/customer service, finance and technical logistics. Cynthia has a Master’s degree in Human Resources Management and Development and has worked in education and Information Technology.

During their research, they came across TWO MEN AND A TRUCK® Canada and decided to explore the franchise possibilities. “We learned they are very customer service-centric and work to  making each move as stress-free as possible. We saw the possibility for a moving company with these traits to thrive in Calgary. In 2015 we started discussions, and we were able to open shop in April 2016. We take the slogan “Movers Who Care®” seriously,” he added.

Cynthia and Chi were so impressed by our company’s approach that Chi talked about the franchise with his brother, George, who had also moved to Edmonton. “I explained to him that I had attended several meetings with management, and believed there was a great opportunity to bring the brand to western Canada.”

George has a strong engineering background focused on organizing and implementing specific details of large-scale industrial projects. He earned a Masters’ degree in Petroleum Engineering and holds B.Eng. designation. “Chi, Cynthia and I did our homework before we decided to open franchises,” George says. “I found the idea interesting right away. Everyone we talked to, including other franchisees, spoke highly of the company and stressed that they have a great support team in place. This firm has a solid background, and I knew that the need for a reliable mover in Edmonton was strong. So far, we have had amazing success.”

George adds, “We have tremendous ongoing support from the corporate office and other franchisees to help us provide the quality of service the firm is known for. We’re proud that we help to achieve the company’s 96 per cent satisfaction in customer feedback in Alberta.”

Both franchises have received letters of thanks from clients who cite their organization, attention to detail and courteous service as reasons for their satisfaction. “We’re a breath of fresh air in the moving industry in western Canada,” Chi says. “Becoming TWO MEN AND A TRUCK® Canada franchisees was a sound business decision for both of us.”