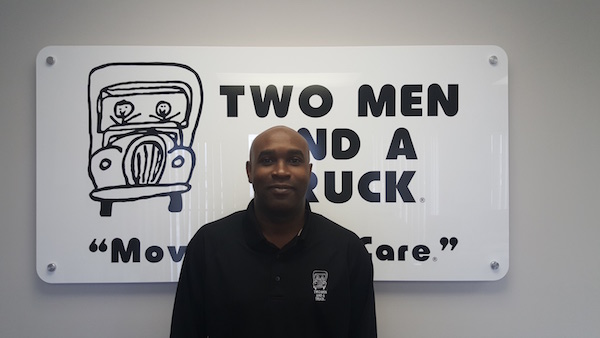 The Canadian Franchise Association has launched a #FranchiseAwareness campaign to educate the public on the franchise business model and its positive impact on the lives of Canadians. TWO MEN AND A TRUCK® Canada is taking part in this campaign by sharing franchisee success stories.

Today we’re talking with Shaun Lindsay from TWO MEN AND A TRUCK® Markham-Pickering, who started as a mover and is now General Manager/Franchisee. We’ve asked Shaun to tell us a little bit about himself and his experience with the TWO MEN AND A TRUCK® Canada franchise. Here’s what he had to say:

I was born in Toronto Canada and I am the youngest of 4 children – 3 boys and 1 girl. My father migrated to Canada in 1964 from Jamaica and my mother followed 1 year later. We moved around the GTA within Toronto, North York and then to Mississauga. Finally settled in Pickering which has been home for me for the last 30 years.

I was introduced to the opportunity of being a mover with TWO MEN AND A TRUCK® Canada by my wife who at the time was a Customer Service Representative with the Oshawa Franchise. My first day on the job showed me something completely new and different. A strong team based environment where family actually meant something and everyone treated each other that same way. I had to be a part of it and 6 years later here I am. It’s been a great experience for me both personally and professionally.

With the opening of the new Markham-Pickering office I can truly say that I am excited about the years to come. By having our new location being based out of the community that I have had a chance to be a part of the for the last 30 years, I see great opportunity. I share in that strong belief that presence is everything, that being said  I know that we have yet to see the potential from these 2 markets. Over this next year building strong new relationships and brand awareness within the community will be my day-to-day initiative. Our goal is to continue our high quality in service through our customer interactions and move execution. I am also looking forward to building a strong team. I am excited about building an environment where are employees can be their self and have fun which is my personal favorite TWO MEN AND A TRUCK® core value.

I’m a family man, so in my spare time I enjoy spending time with my 3 children and wife.  I don’t get as much time to get out on the truck as much as I use to, so to stay in shape I’ll spend a few hours in the gym at the Pickering Recreational Centre.