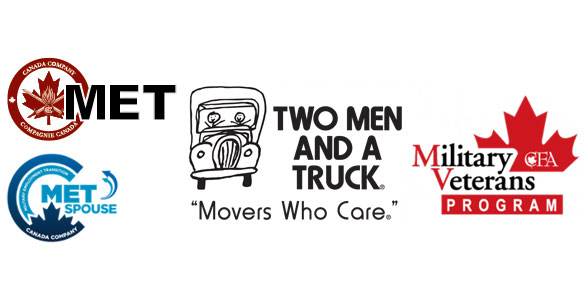 As the largest franchised moving company in North America with over 30 years in the moving business, we’ve learned what qualities to look for in new prospective Franchisees. We also know that success in the military is often achieved through the same qualities that translate to success in franchising – discipline, perseverance, commitment, and an ability to work within a proven system.

That’s why TWO MEN AND A TRUCK® Canada has partnered with the Canadian Franchise Association, in the CFA Military Veterans Program (MVP). This program connects us with honourably discharged military personnel who are looking for their next career opportunity.

The hardworking men and women of Canada’s Military are proven leaders who align perfectly with our core values. So to encourage former military personnel to apply to join the TWO MEN AND A TRUCK® franchise system, we offer Military veterans a 20% discount on their franchise fees.

We want to help veterans transition to the civilian workforce

TWO MEN AND A TRUCK® Canada has partnered with Canada Company in the MET and METSpouse programs.  These programs are committed to hiring transitioning Canadian Armed Forces members, active Reserve members, and Veterans, as well as their spouses.

The MET Program was originally developed in 2012 in concert with the Department of National Defence and Veteran Affairs Canada. It is comprised of more than 250 Canadian Companies that are committed to hiring Veterans and Reservists.

The METSpouse Program is an employer network, administered by Canada Company and Military Family Services, where partnering employers like TWO MEN AND A TRUCK®, are aware of the inherent employability of military spouses and explore accommodation for this mobile workforce. In turn, we strengthen our workforce and enhance our organizational culture and reputation.

We know there is a great deal of work to be done to provide help for our country’s heroes. In an effort to raise awareness of veterans in need, and to honour active military and veterans this Remembrance Day, we are changing our website colours to reflect the colours of Canada.