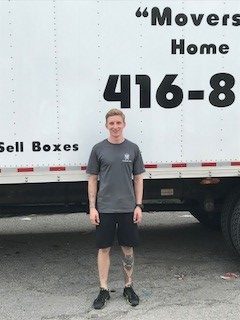 This Friday, we’re sending a High-Five out to Alex Riley, from our Toronto, ON, location!

We asked John Bailey, Owner of TWO MEN AND A TRUCK® Toronto, to tell us about Alex. Here’s what he had to say:

Alex Riley has worked with TWO MEN AND A TRUCK® Toronto for going on four months now. Alex is from Australia where he spent several years as a tank commander in the Australian Army. He has brought that work ethic and pace to his job with us. Alex has shown an extremely positive attitude with co-workers as well as with our customers.

He always shows up early for his shifts and is always willing to jump on another shift when needed to help his fellow workers. Positive, professional, and a work pace that is unmatched he has been a complete pleasure to work with. I think the future is very bright for Alex at TWO MEN AND A TRUCK® Toronto.

Our customers agree that Alex really stands out at his job. Here is what they have said when he’s on their move:

Brandon, Jaydan and Alexander showed up and did an excellent job. They were thoughtful, careful, efficient and organized. Brandon was also mentoring the others and took the lead at organizing the sequence of what was taken out and how it was packed. He was excellent. This is my second move with TWO MEN AND A TRUCK® Toronto and have had another great and stress free experience.
– Danielle

Alex and Jesse were friendly, efficient, and took care when moving my things. They were a big help.
– Julian

Office staff was clear on what was included and the move came within the quoted range. Alex was good at organizing the move and very nice to deal with. Overall it was a very positive experience.
– Eugene

Thank you for taking such great care of our customers Alex! We appreciate the excellent customer service that you’ve provided during each and every move. High five!