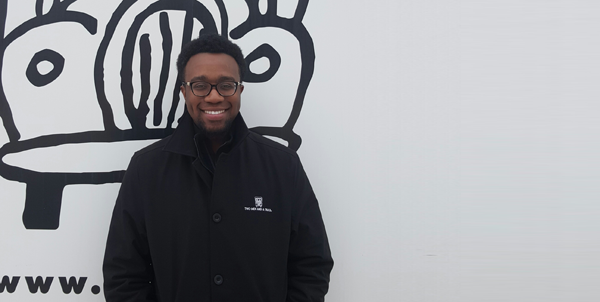 This week’s High Five Friday goes to Michael from TWO MEN AND A TRUCK® Markham-Pickering!

We asked Michael’s boss to tell us a little bit about him. Here’s what he had to say:

“Michael has been with TWO MEN AND A TRUCK® Markham-Pickering since April 2015. In a short time Michael quickly proved himself to be reliable, dedicated and very trustworthy. Michael has always shown a willingness to help out where it may be needed. His understanding of our business has also allowed him to move quickly through the ranks, first as a mover then driver. Michael is now our In-Home Consultant where his experience on the truck really shows and is reflected in the confidence he instills in our customers.”

Here’s what some of our customers had to say about their experience with Michael on the job:

“The one thing that truly represented your company was the service I received for my move. I appreciated the fact that they valued the customer’s time, and sure enough, they showed up on time and immediately started the move. Would like the same crew, Michael, Ryan & Kurtis for my second move.”

“The movers were extremely polite and kind, as well as professional and efficient. They took direction very well and were very gentle with our belongings. The office staff were easy to communicate with and very accommodating. We would definitely use Two Men and a Truck again in the future.”

“My moving team was great! They were friendly and hardworking. I originally chose your company after reading the first year profits were donated to charity and would do so again because of the good experience I had with your office staff and movers.”

Michael, we are very lucky and happy to have you as a part of our team. Congratulations and High Five!