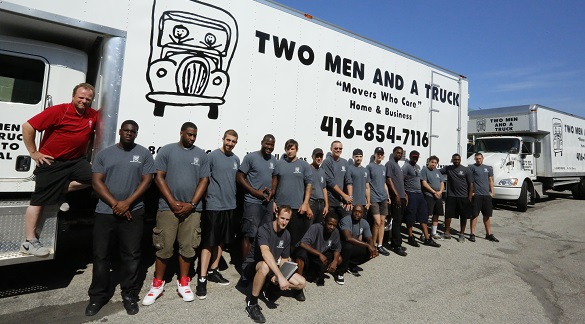 We asked Toronto Central’s Owner and General Manager John Bailey to say a little something about his team. Here are his comments, in his own words:

“Two Men And A Truck® Toronto Central would like to recognize our whole team for its efforts this past month. We would like to recognize a job well done to our Customer Service Representatives, Drivers, Movers, Packers, Office Manager, Sales Manager and Operations Manager. As a team, with the help of our Raving Fan completion we managed to achieve a high level of customer satisfaction and referral rating.”

Here is what our customer’s had to say:

“I would and will recommend you to everyone that I hear is moving. Your service was fabulous. The guys were friendly, hard working and did it all with a smile on their faces. Manny ran up and down a steep flight of stairs about 100 times and was still smiling. Even with the struggles with my piano everyone maintained a positive attitude, no frustration showed at all.

Great care was taken when packing and moving my furniture. Each piece was wrapped securely to protect it. Could not have asked for better care and service.”

“We were totally happy and impressed with the professionalism and the efficiency in which your staff handled the move. Even down to the owner bringing the men Gatorade. We are both in the service industry and we would both highly recommend you again.”

“My move was sudden and had to be done quickly. I had spent a long time calling movers to inquire into rates and process. Two Men and a Truck called me back immediately to give me a quote and worked with my short deadline (less then two weeks notice).

Everyone I spoke with over the phone up to the day of the move were helpful and reassuring and answered all of my questions.

On the day of the move, Kevin and Winston arrived early and ready to go. They were efficient, quick and very careful with my things. They were gentle moving the large pieces out through the common areas of the building and often would remind us not to worry; that they would take care of the lifting. It poured rain, and throughout the move, the two of them were cheerful and reassuring and calming. Moving is stressful, and they were both so great at answering questions and reassuring us.

They wrapped everything! The couch, my antique dresser, my cabinet. They kept my items from getting wet. They had us out of my apartment in less than two hours. They also were so careful with the hardwood floors in both spaces and helped to make sure we could put protective coasters under all the heavy items.

In all, it took a total of five hours to be out and in to my new space – which was exactly what I was quoted for. Kevin and Winston were so cheerful and fun and professional; it made for a hectic afternoon of laughing and relief.

I would absolutely recommend Two Men and a Truck for any moving purposes, and wish the company all the best – They made this sudden move completely possible with little stress associated with the actual move.”

Special thanks to everyone on their efforts.
John